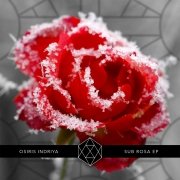 The last time Osiris Indriya released new music was the spring of 2013, a full-length album called I, Aeternal, followed by a CD release party at the world famous Ageha venue outside of Tokyo, Japan. This was his first release on an established international label, Fusion For Peace Productions. His release became the top selling album on Beatport for Wakyo Distribution, the parent company for Fusion For Peace.

Now Osiris has returned to his independent roots, but this time is bringing his Seattle underground producer friends with him. He spent the last two years creating the digital-only label BLESSOTERIC RECORDS, which started releasing new music in March of 2016. Osiris’ vision is to release mostly 3-5 track EPs, shortening the time between song creation and release to the public, and giving his favorite artists, like Michael Maricle license to experiment and define the label sound together.

Here is the description of the Sub Rosa EP from the Blessoteric Records website:

The Sub Rosa EP is inspired by Osiris’ experiences as a ritual magician and kabbalist in the ancient mystery school tradition. This release is passionate and intimate, enticing you into a journey toward the secret heart hidden under the rose.

The release is available for Preorder now, with the full release scheduled for May 26, 2016.